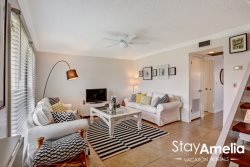 Coastal Living - 20 Best Places to Live on the Coast History that has a more specific record starts with the early Spanish missions in the sixtieth century. In the 1730, James Edward sixtieth laid out two forts, one on each end of the Island. In the 1750, aspiring planters came to the Island once slavery was allowed on its shores. After the American Revolution, prestigious families, such as that of Nathaniel Greene, became interested in Cumberland’s natural resources; the first mansion was built on the site we now know as Dungeness.

The British were present at Cumberland early in the nineteenth century, and there are detailed descriptions of Robert Stafford’s plantation as it existed between 1815 and 1870. The Civil War had a profound effect on the Island’s human history, and Reconstruction saw both speculators and freed slaves trying to wrest a living out of the chaotic devastation the war had caused.

In the early 1880, Thomas Morrison Carnegie and his wife, Lucy Coleman Carnegie, came to the Island and established the family’s presence, which exists to the present day. In the 1960 the human population began to diversify somewhat as the land started to leave the exclusive holdings of individual families, and the evolution of the National Seashore began.

Cumberland Island has already been saved. It was saved from commercial development by the Congressional legislation of 1972 establishing the Cumberland Island National Seashore. Our mission is to work with the National Park Service, to support it and its activities, and to advise it on issues where the Conservancy feels that it will be helpful. The Conservancy is an active co-steward, not an activist group.

The Conservancy does not want Cumberland Island to be just another tourist destination. At the same time, human activity has been part of the Island’s heritage and is one element that makes Cumberland Island so special. The Conservancy is continually striving to find a balance between allowing the public full access to their National Park and preserving the fragile ecosystem for generations to come.


GETTING TO AND FROM THE ISLAND

The National Park Service operates its ferry service from St. Mary’s, GA, stopping at both the Dungeness dock and the Sea Camp Dock. Cumberland can also be accessed through Fernandina Beach, FL, via the vessel operated by The Greyfield Inn.

There are two ways to stay on the island: at Greyfield Inn or at one of the National Park Service campsites. Most visitors to Cumberland Island gain their access through the National Park Service. They camp at one of the various sites on the island. The delightful Greyfield Inn is a more expensive way to stay on the Island. Greyfield is a converted Carnegie mansion still owned and managed by members of the Carnegie family. For more information, visit the Greyfield Inn website at here.

Jump to a Rental